Burns are a lot of things. They start with 10 principles. But when those principles are applied with particular time and space constraints by a self-selected group of humans, it’s difficult to say what burns ARE.

One natural result of a couple principles (namely: Radical Self-expression, Communal Effort, and Participation) is that people build physical contraptions, or art, that others participate with. Cars are probably the most common form (because they’re also really useful) but people also make statues, boardwalks, mazes, gardens, sandboxes, swings, floats, slides, whatever… you name it, some crazy human has tried to build it.

This year while planning for Transformus, somebody posted this photo: 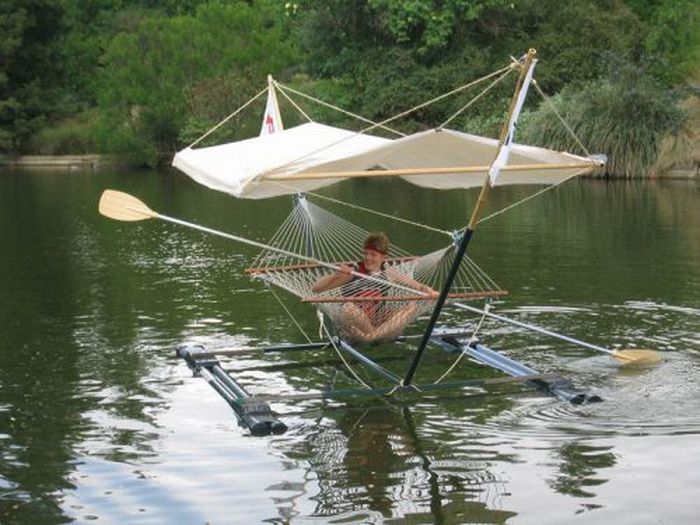 I was immediately intrigued. Others also seemed to think it was cool. Building it seemed entirely doable in the short amount of time I would have while staying with my parents in Atlanta. So build it I would.

Two days before I was to drive to Transformus, I was having trouble procuring a hammock. Mom and I were scouring the websites of Target, Lowes, Home Depot, Walmart… nobody nearby was carrying it. Then we found something even cooler: 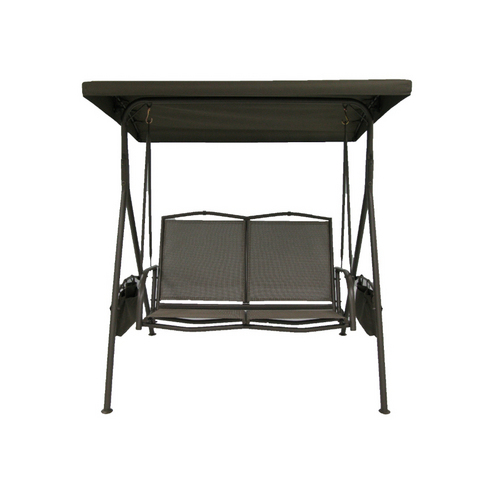 What if we built a floating porch swing!? Wouldn’t that be better, anyhow? It could fit two people comfortably, it’d be easier to paddle around with dangling feet, and, as far as we knew, nobody had done it before!

I banged out the buoyancy calculations, then we hit Lowes. We found all the parts I figured we needed to make this thing happen. 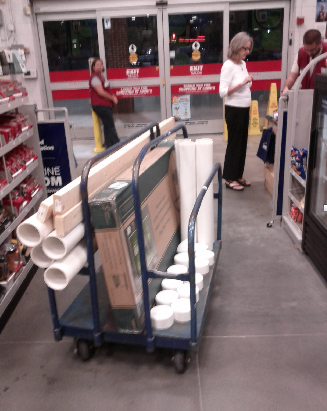 Back home my mom, dad, and I started putting it together (I love being home). A few hours later, feeling satisfied, I posted this photo on Facebook and slept. 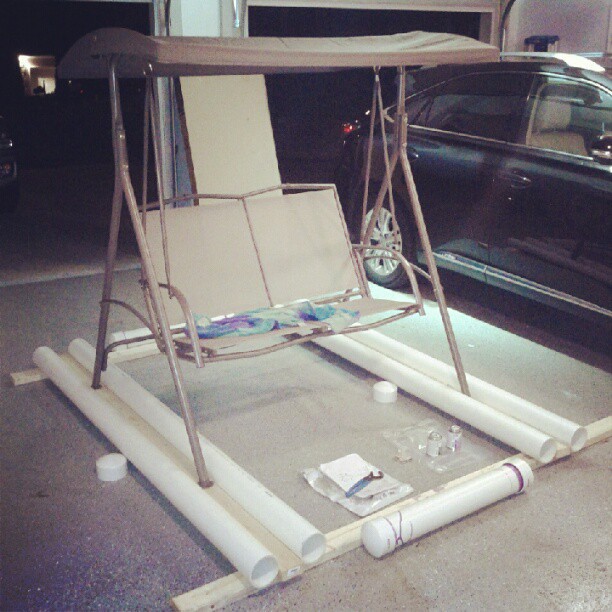 In the morning a couple comments unsettled me. Caleb said there was no way those PVC would provide enough buoyancy. My dad said the same the night before. But I had done the calculations, I thought, it should totally be enough, plus some! So I did an experiment to be sure. I calculated the buoyancy of the small capped PVC, then hit a tub for testing. I calculated that it would displace some 150lbs. But I could easily submerge it with my hand… something was wrong.

So I rechecked the calculations. Turns out the unit conversions got me. I was converting units, but doing it inconsistently. Bah! Math… never my strong suit.

The weight of 1 cubic foot of water is something like 63lbs, depending on the water. But just to be safe, I set it at 50lbs. I wanted this floating device to support 500lbs, or have a buoyancy of +500lbs. So, solving for volume:

Volume of a cylinder = πr2h

IMPORTANT: first, convert everything to the same units. My mistake was squaring the radius in inches first, then converting it to feet…

With that volume of air in the 4 PVC pipes, the float would conservatively support:

At something like 4x less than my initial calculations, it turned out that this contraption would only float so long as nobody tried to ride it… More PVC was too expensive and enough of it wouldn’t even fit in my car. Mom had the idea of using air mattresses. Then we found this: 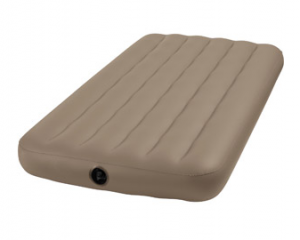 Just one of those fully inflated would displace 740lbs.  We bought two, one for each pontoon. Overkill, sure, but at this point we just wanted it to work.

So, without testing it, I packed it all up in the rental Jeep and headed to Transformus. 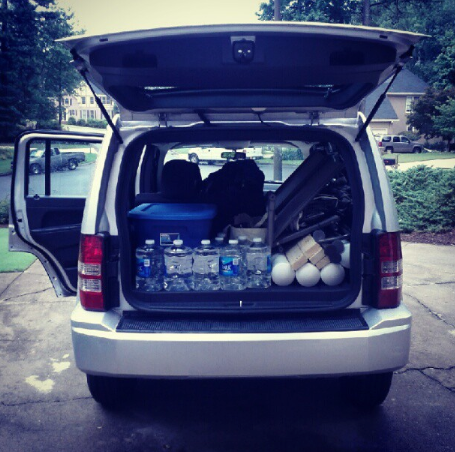 It was fun putting this together in Mysteria and explaining to the inquisitive Mysterians what I intended to do. The “sweet, dude, that’s badass” and “oh, yeah!? cool!” responses were a world apart for the “ok” and silent nods from the people at Lowes.

Lashing the PVC to the wooden frame took the longest, and tore the skin off my pinkies (next time, wear gloves). But I had help from Miguel and Lou. In a couple hours we were carrying the completed raft and swing to the lake.

Just as Transformus was ramping up Friday afternoon, we launched. 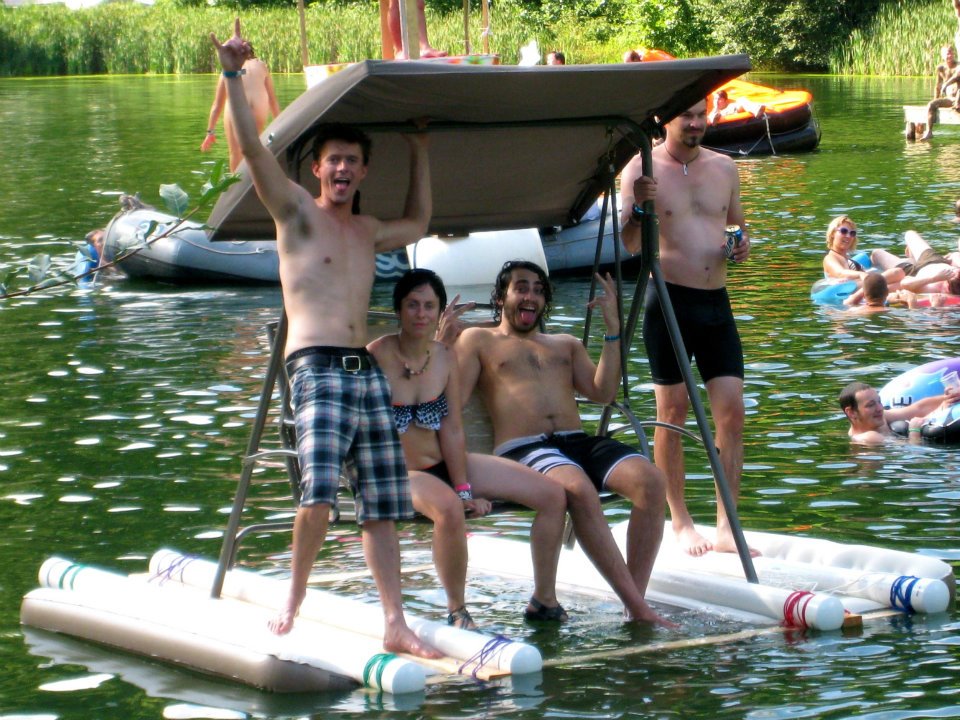 It was a success! We played with it for a bit, tested for the Pontoon Effect. It was tippable, sure, but plenty stable if people were careful. So I eventually hopped off and pushed it off into the lake for any random Burner to play with. From the dock, I watched a few people get on it. Then I headed back for some food.

I think it lasted most of the afternoon. I wish I saw its demise. Apparently, it was hilarious. Some (likely inebriated) burner or two flipped it trying to get on. Someone managed to drag it out of the lake and set the pieces (the swing support structure was mangled) there on the bank. The chair still worked, though, and was used thoroughly for various activities throughout the weekend.

The next morning my buddy Michael told me some people were trying to float a massive 6ft tall rocking horse on my pontoon platform. I said, “kick ass!” and hurried up to the lake to help. After strapping it down and tinkering with various float arrangements, it was launched and awesomely ridiculous.

Burners have a special scrappiness when it comes to maximizing fun. 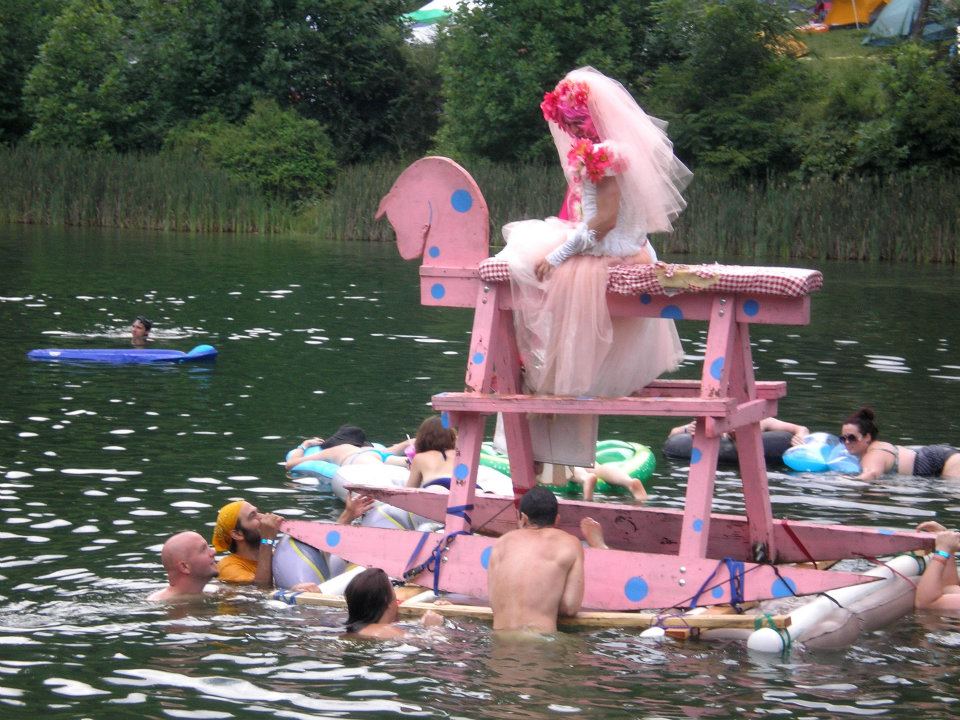