The Life of Pipe

Pipe was going to change how people kept in touch. Instead of sloshing through the swamps of social networks, task lists, relationship managers, and emails to figure out who to contact and when, you’d simply open Pipe. And there’d be ONE person, THE person you want to connect with… or not. If not, you tell Pipe it was wrong and why, and Pipe will learn.

I was elated to discover that this Pipe dream wasn’t a pipe dream. Pipe would come to exist, not just for me but for many others. But I’m getting ahead of myself.

This post is about the life of Pipe. From conception to death… and beyond. 😉

I suck at keeping in touch. Now, after many bouts of introspection, I think the core causes of this ailment are: a bit of introvert and a lot of lazy. Connecting with people takes energy. No app can totally fix this. But like all personality tendencies, I figure I can tweak it with focus.

But how? It irritated me to use the existing tools for helping keep in touch: too much noise, too much clicking around, too transient… I needed something simple that reminded me of who to contact and when, and only showed me the information that was relevant to doing so. Good idea, I thought. Sketches went up on the idea board.

Then along came the Locker Project. Now THAT is a good idea. Where’s that going? Who’s working on it? These guys at Singly. And they’re planning an App Challenge!

But what would I build? How would I get on a team? .NET developer is not a very marketable skill in this town.

The answer was staring back at me on my idea board. I’ll pitch this idea, come prepared to build it myself if need be, and try to find people who can work on the javascript stack I was learning! All I needed was a pitch.

When I dropped the question in the Singly IRC channel, quartzjer guessed we had a couple minutes per pitch. So I worked up three minutes of problem, solution, details, and finale.

Joaquin Mendoza, a fellow entrepreneur and later teammate, helped me refine the pitch, infuse it with excitement, and connect more directly with the audience.

When we got to the venue and registered they told us each pitch would be 60 seconds, and not a second longer. Damn. My mind (and heart) raced for about an hour before it was my turn to take the stage.

The speech was… adequate. But giving it felt like a major victory.

Each attendee had 5 votes. We placed the stickies they gave us on white sheets tagged with the app names of those we thought should go on. Less than half of the people who pitched would be invited to form teams (if they hadn’t already) and proceed.

I stood by my sheet and schmoozed my face off to get stickies. Pipe managed to do pretty well—at a glance I’d say top 5. People liked it!

After the first round winners were announced I met the Ragone brothers, Peter and David. Peter, a NY resident, was in town interviewing for engineering positions. David, like me, was a recent transplant to the Bay Area in search of fortune and glory in the startup world. Together, the Ragone brothers would bring tech muscle and business savvy to the Pipe team.

Joaquin’s idea didn’t generate enough interest, so he decided to join up and throw his positive enthusiasm and talents into Pipe.

Sina Khanifar, UI badass and all around nice guy, circled around when we were discussing the idea and mocking up wireframes. He threw us a few suggestions we liked, then decided to join.

An hour or so later the newly formed Pipe team had narrowed down an MVP, split out roles, and outlined a game plan for the rest of the night and tomorrow morning. 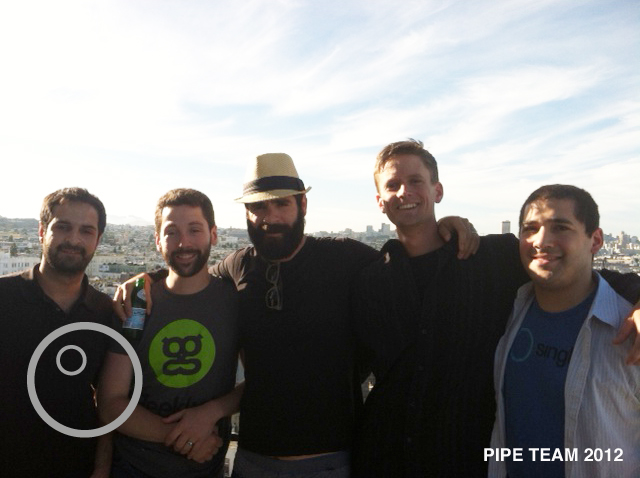 This was my first ever hackathon. Pipe would be my first ever app built on node.js. Frequent missteps set the rapid pace of learning.

I started with the data model. Then I worked up the Ember states, views, and controllers. Then I refactored it all again, and again. Then I moved a bunch of stuff to the server, then refactored again…

Peter was figuring out a backend, setting up infrastructure, tweaking code, and helping me git. Sina was crafting a beautiful UI. David and Joaquin were hammering out market analysis and strategy.

We periodically reviewed where we were at and hoped to be in 24 hours. We cut things out. We came up with short-term bandaids and veneers.

And little by little, Pipe grew.

Singly was calling it an App Challenge instead of a Hackathon. Apparently, the former encourages the creation of viable products instead of gee-wiz hacks that nobody would use. In order to win, we were to demonstrate actual viability in the marketplace. That meant real users.

This put the pressure on us to actually launch something that worked. Or otherwise demonstrate that people were interested in using a working product like it.

David and Joaquin walked around, solicited feedback, and collected video interviews as Peter and I scrambled to get something launched.

Hacker News, the defacto geek pop chart, would be our best chance at proving to the judges that people wanted what we built.

About 2 hours before the final pitch, we had our site launched, listed, and climbing the hacker news ranks. The site was so buggy it crashed repeatedly when we first launched it. We managed to get it fixed only after probably hundreds of people noticed it… 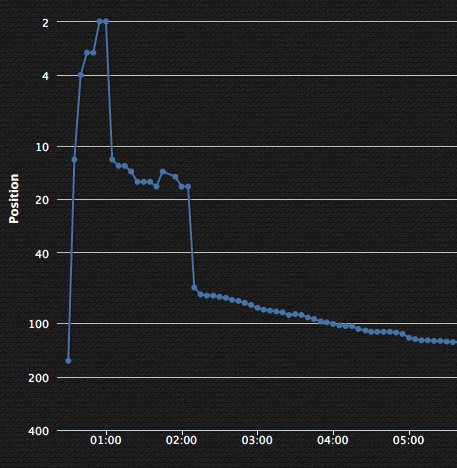 That spike marks the definitive moment Pipe was born: Sunday June 3rd, 2012 at 12:30pm. Pipe’s horoscope said to “get outside the box, Cancer, and get into the groove…” whatever that means.

When I finally stopped coding, I started pacing. Now I had to sell this idea to tech heavy-weights: VCs, journalists, CEOs, serial entrepreneurs… people who have sat through thousands, perhaps hundreds of thousands of pitches. We had two minutes on stage.

There were about 20 pitches. We were last.

When I finally took the stage, I congratulated everyone on surviving this long and tortuous event, then dropped our finely crafted opening lines:

I, like most of you, have well over 1,000 connections I’ve made in my personal and professional life, in all the networks: LinkedIn, Twitter, Facebook, and Google. But I only really ever keep in touch with maybe 30.

I feel very disconnected from the vast majority of my network.

Pipe is a simple tool that helps you keep your network fresh, by showing you the one person who you should contact each day.

Then as Sina navigated the demo, I explained how it worked, its potential, and why people cared. Applause errupted after we announced reaching the #2 spot on hacker news.

We didn’t manage to finish under the 2 minutes and had to cut our video short. Didn’t matter. We were done. And we did well. 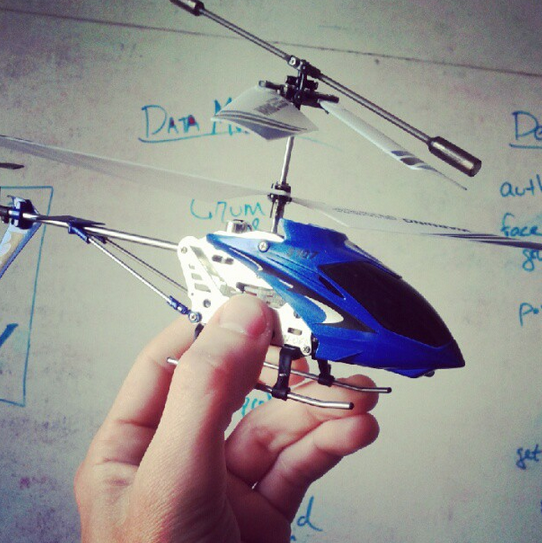 After a night of exhausted schmoozing, lots of smiles, handshakes, and hugs, I curled up in bed for a long, still slumber.

The sweetest reward was the entire next day of rest.

Well, almost the entire day. Om Malik, one of the judges and a well-known tech journalist, published an article about us.

This sudden and unexpected exposure freaked me out a bit since Pipe, as it existed then, was a buggy hackathon proof-of-concept that was by no means ready for primetime. But, as they say, this was a good problem to have.

After Sina and I both wrote Om and thanked him for the article, his simple response motivated me more than his article:

Augustin
Good luck to you and your team. I am pretty sure you are going to knock it out of the park
Best

Now, we had to make this thing happen for real.

Justin Hovey, a startup lawyer in SF, gave a speech about the Hackathon Hangover at AngelHack recently. The basic idea is that you go to a hackathon, pick up a team, have an amazing/intense time, then wake up the next day to find her mom cooking you breakfast. And you’re like, whoa…

Pipe was grown and birthed by a group of strangers. All nice people, but total strangers. Now that the Pipe dream was becoming Pipe reality, we had to determine to what extent and how we wanted to get into long-term relationships with one another.

We discussed options with each other for a while. Nothing seemed totally attractive to me. So I decided to not make any decisions. All I knew was that I had to get Pipe to a stable beta. I told the team what I was going to do and got to work.

Two weeks later, I launched a true beta. Which is live today on http://pipeapp.co

Shortly after AngelHack (and an EPIC win with team GiveGo), it was suggested to me to sort out the Pipe situation. Who’s owning it? Where’s it going?

I emailed and chatted with the team again, and then talked with a lawyer. Nobody really wanted to continue working on Pipe but me, but I also shouldn’t continue it myself unless I had some sort of arrangement with the rest of the team, which meant paper work, lawyer fees, and so on.

The cleanest choice was to simply abandon Pipe. I could continue the idea, of course, but I’d need a new codebase, name, brand, etc.

Fine, I thought, the name had its drawbacks: it was taken by this Pipe, and there were concerns about our domain getpiped.com… even though I thought it was brilliant. And the codebase probably needed to be rewritten anyway.

So I said goodbye.

Ideas can live on long after their early manifestations decay.

Pipe was part of a larger idea. It was cool in its own right (as a tool to help you connect better) but its deeper purpose was to demonstrate the benefits of having control of your data. Pipe was network agnostic: Facebook, Twitter, LinkedIn, Email, and more in the future… connect all of them. And use Pipe in lieu of them.

The greatest manifestations of this idea have yet to come.

But come they will.

When they do, some of us will hear Pipe softly whispering on the winds of a great storm…